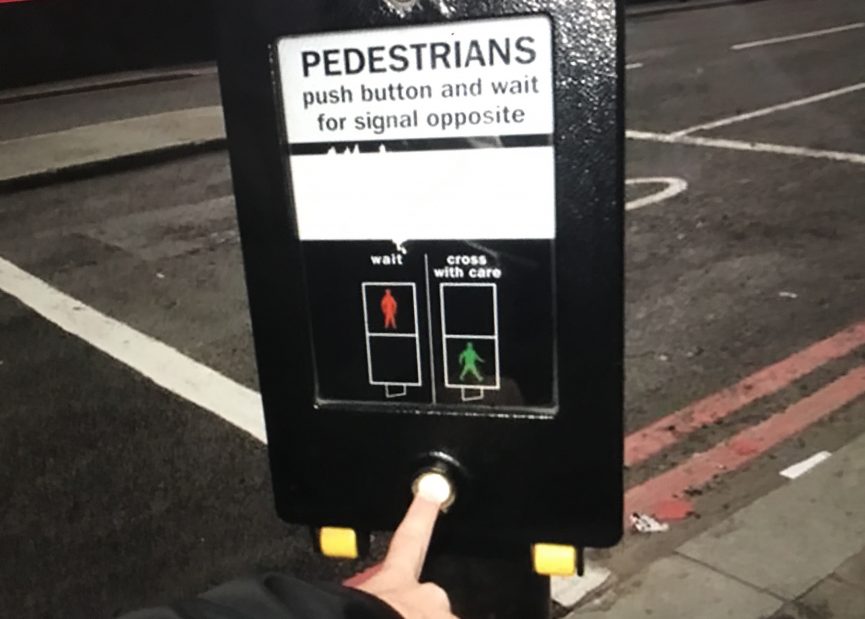 You are walking down the street and get to a corner where you need to wait for the traffic to stop in order to cross…… Do you push the button?   You know that  black box with buttons and images of a green and red man installed at many intersections.  Just because one person wants to walk across the street and he/she presses a button does the entire grid of a perfectly timed traffic light system change?  I don’t think so.  I did a little research into these buttons and discovered a lot of confusing algorithms of cycles and modes of how and when they work. Basically, the answer is that if you are at a busy intersection they don’t work and if  you are at an intersection where there is little traffic they do….maybe.  Wait a second… if there is no traffic who waits for the light to change to cross the street and who feels the need to push a button???

I often wondered who actually pushes and why.  Some people religiously press the button convinced of the power in their finger to stop traffic because of their desire to move. Others think its dumb, some don’t want to touch because of all the germs and many really never noticed them. Why does a town go to the expense of installing and maintaining these?  I think its a huge joke played on the public to give them a sense of control. Perhaps there are secret cameras installed and there is some global psychological study being done on human behavior.  Maybe it’s a placebo and alleviates stress for those people who can’t be still for the 3 minutes it takes for the light to change. Or, it gives people the illusion of control and power and makes for a happier population and actually lowers the murder rates. Next time you are at an intersection, notice if you push or who actually pushes the button…It might give you a little insight into who they are.